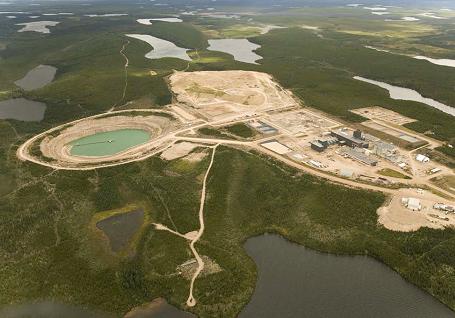 The main types of waste generated by the mining and milling of uranium ore are tailings and waste rock.

Tailings are the waste produced by grinding the ore and the chemical concentration of uranium. When dried, tailings have the consistency of fine sand.

Waste rock is simply rock material removed from the mine to gain access to the ore. It has very little to no concentration of uranium.

Waste rock is separated into clean rock or mineralized rock, according to its mineral content.

Tailings and mineralized waste rock must be managed over the long term because they could contain significant concentrations of radioactive elements (primarily thorium-230 and radium-226, along with their associated decay products).

Tailings and mineralized waste rock are contained in engineered surface and near-surface waste management facilities located near the mines and mills.

Tailings are stored in tailings management facilities (TMFs) designed to isolate the tailings from the surrounding environment for a very long time.

TMFs are located within mined-out open pits or in surface impoundments, which use geographical features and man-made barriers such as dams to contain the tailings. They are designed to ensure that groundwater and surface water is diverted from the tailings to prevent any contamination.

Tailings are generally deposited underwater to:

Tailings are deposited in the TMF as a slurry. The solids settle in the TMF, while the liquids are later collected and processed through a water treatment plant to remove contaminants.

The resulting effluent must meet regulated quality requirements before it is allowed to be discharged into the environment.

All of these facilities are in-pit TMFs as depicted in the image to the right.

There are also two inactive above-ground TMFs located at the Rabbit Lake and Key Lake Operations.

The ore extracted from the McArthur River and Cigar Lake Mines is milled and the tailings are stored at the Key Lake and McClean Lake operations.

In addition to tailings, mining activities produce large quantities of clean and mineralized waste rock, which must be excavated to access the uranium ore body.

During mining operations, clean and mineralized waste rock will be placed in separate rock piles, as each require different management practices. 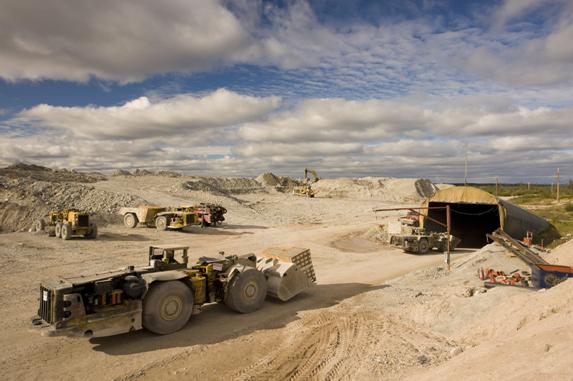 Clean waste rock can be used for construction activities, such as aggregate in concrete and the construction of roads.

Clean rock that is left over once mining has ceased can be left in piles on the surface, contoured to blend in with the natural environment and revegetated.

If left exposed on the surface indefinitely, this waste rock could generate acid or release contaminants at rates that could impact the local environment.

During operations, mineralized waste rock is deposited on impermeable pads.

Seepage and run-off from the mineralized waste rock piles are collected and processed through a water treatment plant to remove contaminants before they are released to the environment.

Wherever possible, mines are specifically designed to minimize the volume of mineralized rock removed from the mine and to return mineralized waste rock to the mine (as backfill).

Long-term management of mineralized waste rock includes depositing the rock in mined-out open pits, topping them with clean waste rock (or till) and covering surface piles with canopies engineered to minimize the infiltration of water and erosion.

Closed and decommissioned mines and mills

There are 20 TMFs located at closed or decommissioned uranium mines in Canada: 14 in Ontario, four in Saskatchewan and two in the Northwest Territories.

These inactive sites are being managed for the long term by their former owners or by the federal or respective provincial governments. The Canadian Nuclear Safety Commission (CNSC) regulates the sites by closely monitoring their maintenance and environmental performance.

Closed and decommissioned mines and mills in Canada 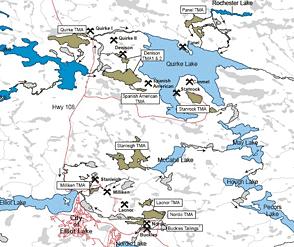 Fifteen uranium mines began production between 1955 and 1960 in the Elliot Lake and Bancroft areas.

Ten mills in the Elliot Lake area and three in the Bancroft area produced tailings.

The last of these mines ceased operations and was decommissioned in the 1990s.

There are 12 inactive uranium mine sites and 10 uranium tailings management area in and around Elliot Lake, Ontario.

All of the Elliot Lake uranium mines were brought into production between 1955 and 1958.

By 1970, five of the mines had been shut down. Two companies – Rio Algom Ltd. and Denison Mines Inc. – operated and decommissioned the sites, with decommissioning starting in 1992 and lasting for a decade.

All of the sites have now been substantially decommissioned, with all mine features capped or blocked, all facility structures demolished and all sites landscaped and revegetated (active decommissioning).

The effectiveness of site remediation and the influence on the surrounding environment are being monitored.

The Serpent River Watershed Monitoring Program is an extensive program that monitors the environmental quality across the basin and near the Pronto site, which is located outside of the watershed.

The program was designed in consultation with federal and provincial regulators, including the CNSC. Assessments of monitoring results have been presented in periodic environment reports.

Key findings in the review of the environmental data collected between 2005 and 2009 show that current releases to the environment are extremely low and that there are virtually no measurable impacts outside the licensed areas.

The Agnew Lake mine, located about 25 kilometres northwest of Nairn Centre, Ontario stopped operating in 1983.

The uranium mine site was decommissioned and monitored by Kerr Addison Mines from 1983 until 1988. The site was then turned over to the province of Ontario in the early 1990s.

Water quality is regularly monitored to confirm the success of the remediation project. 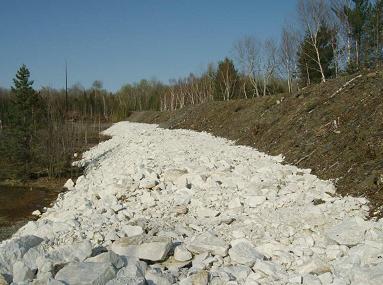 Operations at the Dyno mine and Bicroft sites ceased in the early 1960s, while the Madawaska mine has been inactive since 1983.

The Dyno Mine and Madawaska Mine sites are managed and monitored by EWL Management Ltd.

The Bicroft site is managed by Barrick Gold Corporation.

Water is sampled regularly to confirm the remediation projects are successful and to verify that requirements are being complied with. 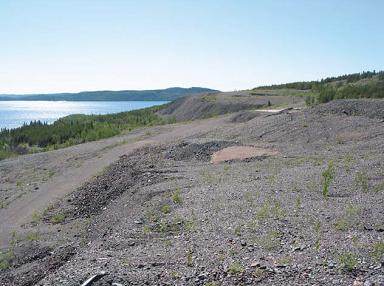 There are four closed and decommissioned uranium mine sites in Northern Saskatchewan: Cluff Lake, Beaverlodge, Lorado and Gunnar.

Uranium mining and milling operations began in 1980 and ended in 2002. A comprehensive study report was completed and accepted by the CNSC in 2004, resulting in the authorization to proceed with decommissioning activities.

The active decommissioning of the mill, tailings management area (TMA) and mining areas was completed between 2004 and 2006. Some infrastructure was left in place, allowing site monitoring to continue while allowing Orano Canada to maintain a full-time presence.

In 2013, Orano Canada requested to discontinue full-time site presence. The CNSC accepted the request, and the decommissioning of the remaining infrastructure was completed. The site will continue to be monitored four times per year.

In 2019, CNSC held a one-part public hearing to consider an application from Orano Canada Inc. to renew the Uranium Mine Decommissioning Licence for the Cluff Lake Project located in the Athabasca Basin of northern Saskatchewan. Following the hearing, CNSC announced its decision to renew the Uranium Mine Licence allowing Orano to decommission the Project site, possess, manage and store nuclear substances. The licence will be valid from August 1, 2019 to July 31, 2024.

Cameco Corporation (Cameco) currently holds a waste facility operating licence for the site that is valid until May 31, 2023.

Uranium mining and milling operations commenced in 1952 and ceased in 1982. Decommissioning began in 1982, with the active decommissioning completed in 1985. Since then, the site has been in a monitoring and maintenance phase.

The Saskatchewan Research Council holds the decommissioning licence for the Gunnar and Lorado sites. Both sites have yet to be fully decommissioned.

Private-sector companies that no longer exist operated these facilities from the 1950s until the early 1960s. The governments of Canada and Saskatchewan are responsible for the cost of the cleanup.

CNSC staff, together with the Saskatchewan Ministry of the Environment, regularly inspect these facilities. 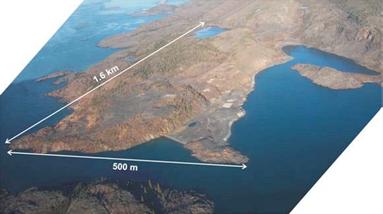 Aerial view of the decommissioned Port Radium mine site

There are two licensed closed uranium mine and tailings sites in the Northwest Territories: Port Radium mine and Rayrock mine.

The Port Radium site is located in the Northwest Territories at Echo Bay, on the eastern shores of Great Bear Lake, about 265 kilometres east of the Dene community of Déline at the edge of the Arctic Circle.

The site was partially decommissioned in 1984, according to the standards of the day. In 2006, the Government of Canada reached an agreement with the local community and completed the remediation of the site in 2007 under a CNSC licence.

Regular water samplings are taken to confirm the success of the remediation project. 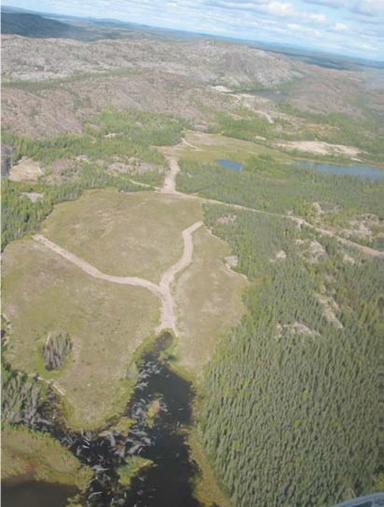 Aerial view of the Rayrock site

Uranium mining and milling occurred at the Rayrock site from 1957 until 1959, when it was abandoned.

The Government of Canada decommissioned and rehabilitated the Rayrock site (including capping the tailings) in 1996.

Performance monitoring and reporting of the results have been ongoing since 1996.

Regular water samplings are taken to confirm the success of the remediation project.

There are 78 historic radium/uranium mines without tailings across Canada, dating from the uranium mining "boom" years (1930s to 1960s).

These sites, known as idle mines, were exempted from CNSC regulation because of the low risk they present.

Idle mines are currently being regulated for safety under provincial and territorial mining and land management acts.

They are located primarily in the areas of Uranium City, Saskatchewan and Bancroft, Ontario. Additional sites are located in the Northwest Territories.

Ore from these small mines was hauled away for custom milling; therefore, no uranium tailings can be found onsite.

These idle mines are, in all physical and radiological characteristics, indistinguishable from conventional mines.